In the SCA, martial (fighting) activities come in a variety of flavours: armoured combat, rapier combat, and archery (both armoured and target). You can choose one or all styles, if you have the time.

Armoured combat (sometimes called ‘Heavy Fighting’ is one of the most visible of the SCA’s activities.

Fighters can either make their own armour (after researching styles and methods of armoury) or, if they can afford it, armour can be purchased online or at Markets held at events around the Kingdom.

The new would-be fighter needs to train in SCA-style fighting and be authorised by an official Marshal prior to entering a tournament or taking to the war field. No SCA-style fighting may be carried out unless a Marshal is present. The Marshal is equivalent to a referee or umpire, but does not determine the outcome of the battle.

In some states, you must carry an authorisation card and/or a membership card if you carry an SCA weapon in any public place. They may only be rattan and not edged, but they are still a prescribed weapon.

For more information, check out the Kingdom of Lochac’s Marshal website. The rules for armoured combat can also be found there. 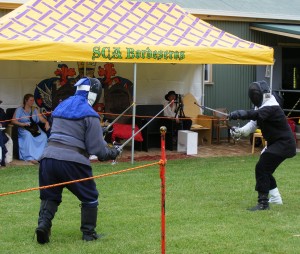 This involved fighting with non-rattan weapons, including sabre, epee and rapier. SCA rapier combat differs from modern fencing styles, however, and sturdier weapons are used. Unlike Olympic style fencing, SCA style rapier is not fought in a single line, fighters can move throughout the whole of the tournament area. Many fencers research and adopt period fencing styles, known from surviving documentation, or reconstructed from other period sources.

For more information, visit the Kingdom of Lochac’s Rapier website.

This is archery on the war field, shooting opposing combatants.  Armour is generally of the same standard as armoured (‘heavy’) combat. There are also combat archery tournaments for archers only. Combat archery uses arrows with rubber ‘blunts’, instead of pointed arrows. Details on combat archery in Lochac can be found on the Kingdom’s Archery website. 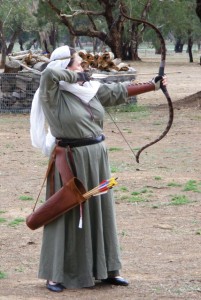 If you don’t want to put on armour, you can shoot at targets instead. These shoots use pointed arrows. There are a variety of different tournament formats, or you can just shoot for fun. Generally, compound bows or bows with aids are not used.

Details on target archery in Lochac can be found on the Kingdom’s Archery website.

In the SCA, it is possible for trebuchets, onagers and other catapults to be on the war field, but it depends on local (mundane) laws. These weapons are forbidden under NSW and Victorian state laws and may not be constructed or used in these states. However, if you’re interested in medieval siege combat, you are perfectly welcome to research the subject from an Arts and Sciences perspective, and share your knowledge with your fellow SCAdians.

This is the recognised website for the Shire of Bordescros of the Society for Creative Anachronism, Inc. and is maintained by the Shire Webwright. For information on using photographs, articles, or artwork from this web site, please contact the webwright for assistance in contacting the original creator of the piece. Please respect the legal rights of our contributors. Further Website Policies are available.